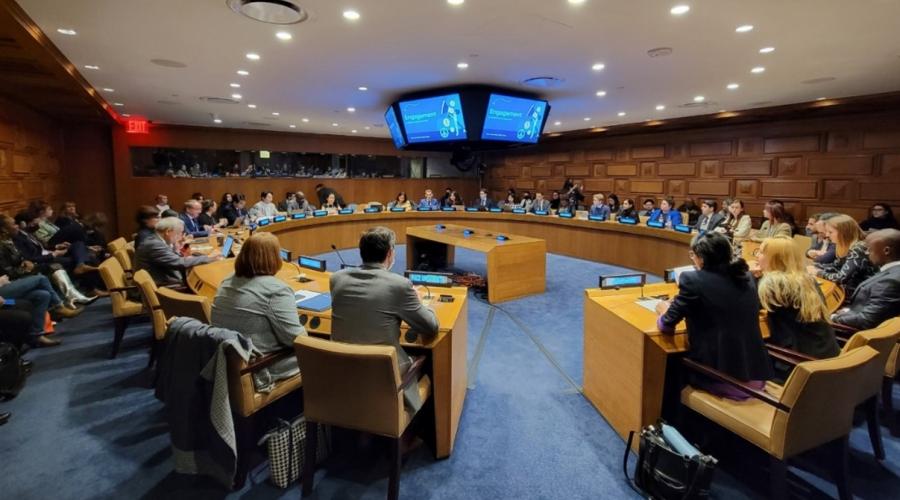 The cohort of young leaders developed their projects following the completion of the #Leaders4Tomorrow workshop series, which explored the linkages between D.N.A. and five topics related to international peace and security: education, emerging technologies, environment, gender, and the Sustainable Development Goals.

With generous financial support from the Government of the Republic of Korea, the #Leaders4Tomorrow travelled to the United Nations Headquarters to share their ideas and explore the theme of ‘Disarmament Education as a solution to peace’ as part of a four-day study visit.

Mr. Adedeji Ebo, Director and Deputy to the High Representative for Disarmament Affairs, delivered opening remarks on behalf of Ms. Izumi Nakamitsu, the High Representative for Disarmament Affairs, noting the young leaders will spark a ripple effect in their local communities. “As our world faces multiple global challenges, including increased global tensions, we need your leadership, innovation, and action more than ever before -  simply put, as the leaders for tomorrow, we need you to act today,” he emphasized.

In opening remarks, Mr. Sunghoon Kim, Counsellor, Permanent Mission of the Republic of Korea to United Nations, emphasized the importance of meaningful youth engagement and noted the Republic of Korea’s commitment to facilitating platforms for young people to participate and contribute to disarmament efforts, as national and global citizens.

Ms. Jayathma Wickramanayake, UN Secretary-General's Envoy on Youth, underscored the inclusion of young people as paramount for creating a more sustainable and peaceful world for all in remarks delivered virtually. “Their innovative ideas to engage fellow youth on topics related to disarmament will inform, inspire and drive the transformation we seek,” she noted.

A diverse range of initiatives were highlighted by the group, ranging from research projects, interactive materials, a film documentary to feature the stories of youth advocates, and a baking campaign to raise awareness for nuclear disarmament. By providing an array of activities, the #Leaders4Tomorrow will strive to provide platforms for young people of all backgrounds and interests to learn about disarmament and its role in establishing a safer, more peaceful world. Find out more about the projects by visiting the #Leaders4Tomorrow’s profile pages.

In his response to the presentations, Ambassador Mohan Pieris of Sri Lanka, Chair of the First Committee, emphasized the need for intergenerational partnership to ensure the projects reach their full potential and maximize impact.

Representatives from Member States provided remarks on the importance of disarmament education as an avenue to engage and empower young people, including Ambassador Thomas Göbel, Permanent Representative of Germany to the Conference on Disarmament in Geneva, and Mr. Eduardo Alcibíades Sánchez Kiesslich, UNSC Deputy Political Coordinator, non-proliferation & East Africa at Permanent Mission of Mexico to the UN.

Noting the creativity and innovation of the #Leaders4Tomorrow, Dr. Matthew Bolton of Pace University, commended the group on their projects. Ms. Taylor Mangus, student representative of Pace University, emphasized the importance of youth-inclusive and youth-led activities and noted how the #Leaders4Tomorrow workshop series aligned with the Joint Civil Society Statement on Youth Engagement and Peace, Disarmament and Non-Proliferation Education delivered to the First Committee.

In closing remarks, Ms. Radha Day, Chief of the Regional Disarmament, Information and Outreach Branch of UNODA, congratulated the young leaders on their constructive and informative presentations and noted education as a key tool for engaging audiences not traditionally involved in the disarmament field.

The side-event provided a platform for youth voices to be heard, to inspire intergenerational solidarity and to highlight the linkages between D.N.A. and relevant topics with a wider network of young peacebuilders. The cohort of young leaders will now embark on implementing their projects to advance disarmament education as a solution to peace.

To follow their journeys as #Leaders4Tomorrow, be sure to visit the #Youth4Disarmament website. A recording of the side event is available to watch here.