The Power of One to ‘Knot the Gun’ 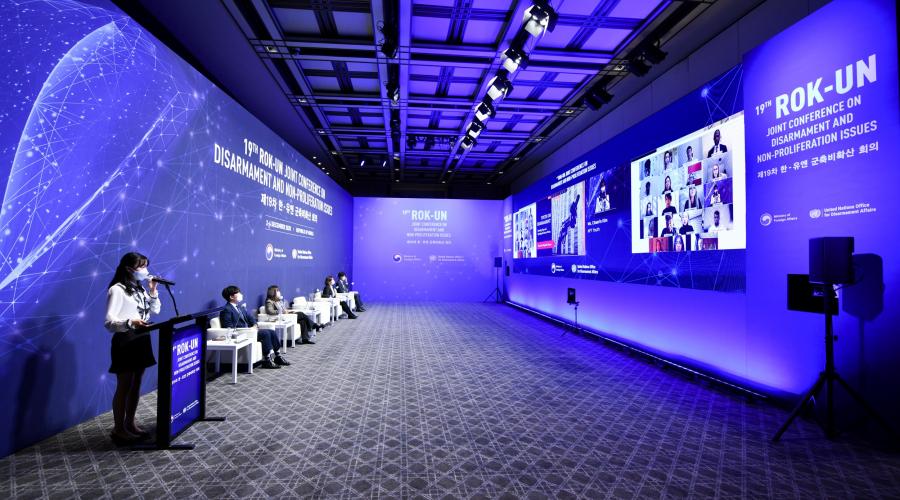 Last August, as an unprecedented spell of rain swept over the Korean Peninsula, I found myself preoccupied by questions of nuclear safety and security. There was mounting speculation that flooding had damaged the nuclear reactor cooling systems at Yongbyon—located to the north—and as my mind buzzed with worst-case scenarios, I wondered how some could greet the possible crisis with nonchalance.

The existential threat of nuclear conflict can sometimes overshadow subtler risks. For young people, especially, a lack of clear and accurate information can obscure the potentially serious implications of nuclear and other arms-related challenges for our day-to-day lives. Yet, for me, the potential consequences are too grave not to act.

At a youth programme for the 2012 Nuclear Security Summit in Seoul, I came to understand our generation’s direct stake in disarmament and non-proliferation. Feeling a duty to stay informed, I began participating in model international conferences to educate myself.

Last year, I had the opportunity to participate in the 2020 Youth NPT Conference organized by the Republic of Korea and to work as a member of the Friends of NPT group. In the half-year leading up to the Conference, I joined peers in a series of intensive preparatory sessions and lectures where we explored strategies to resolve the current international deadlock on nuclear disarmament. Then, during a simulation of the upcoming tenth NPT Review Conference, I assumed the role of a delegate representing a State party to the Treaty.

By taking part in that process, I realized that countries with nuclear weapons are locking themselves into a new kind of technology-centred arms race by making their weapons faster, more accurate and harder to defend against. And with all of these countries believing they can “win” this race to achieve security, they are less willing to look beyond their rivalries in search of compromise to build confidence. They are even backing out of existing arms control treaties, adding to the international tensions that make an accidental spark more likely to start a huge fire.

During the Conference, it also occurred to me that countries handle violent acts and threats amongst themselves quite differently from matters of violence involving individuals. While governments can claim the final word in settling disputes between their people, in the absence of a comparable authority at the international level, each State effectively acts as the judge in its own cause.

As individual citizens, though, we have the power to interrogate the acts and threats made on our behalf. That is what I have been doing, and that is how I began to ask what I, as one young person, can do to open the door to peace.

At the December 2020 Youth Special Session, held ahead of the nineteenth Republic of Korea-United Nations Joint Conference on Disarmament and Non-Proliferation Issues, I considered this question along with 24 peers tackling international security challenges on five youth working groups. I am grateful to the Republic of Korea Ministry of Foreign Affairs and the UN Office for Disarmament Affairs for organizing this session, where we emphasized the importance of strengthening multilateralism and developing a flexible disarmament and non-proliferation regime to address challenges from new and emerging technologies. We also had an in-depth discussion on how to manage strategic competition, build peace at regional and international levels, and support youth action for disarmament through closer coordination and more opportunities to participate in intergovernmental processes. It was enlightening to engage with the other youth participants, all of whom share my passion and dedication to these issues. The sense of comradeship was truly enjoyable—and reassuring.

After taking part in the Youth Special Session, we had the honour to observe the closed-door discussions of the ROK-UN Conference on 3 and 4 December. The heated dialogue between experts in government, civil society, academia and industry reminded me that in order to innovate in ways that help all of us, we need to consider a wide range of perspectives on the ramifications of new and emerging technologies. As I took in all the underlying complexities, I learned that even though policy-makers focusing on disarmament and non-proliferation are at odds with technological innovators in certain respects, finding where their interests and understandings converge can help us mitigate risk. In other words, devising comprehensive-yet-enforceable measures will require experts from both sides working to bridge their differences.

Mindful of all the ethical and moral considerations involved, our group of youth observers urged the leaders and decision-makers at the ROK-UN Conference to carefully contemplate the values that different emerging technologies promote. Technology should not be a tool for aiding and abetting marginalization and structural discrimination, or for launching a new phase of futile nuclear arms race. For this message to be heard by those in power, it needs to come collectively, clearly and consistently from many different actors, including youth.

It is up to us, the young people who now make up 40% of the world’s population, to take the lead in securing our common future and shaping a culture of peace. As an individual, I will endeavour to be a vigilant voter, responsible consumer, and independent global citizen. And by continuing to inform ourselves and speak out, we all can contribute to a safer and brighter future for our generation and those to come.