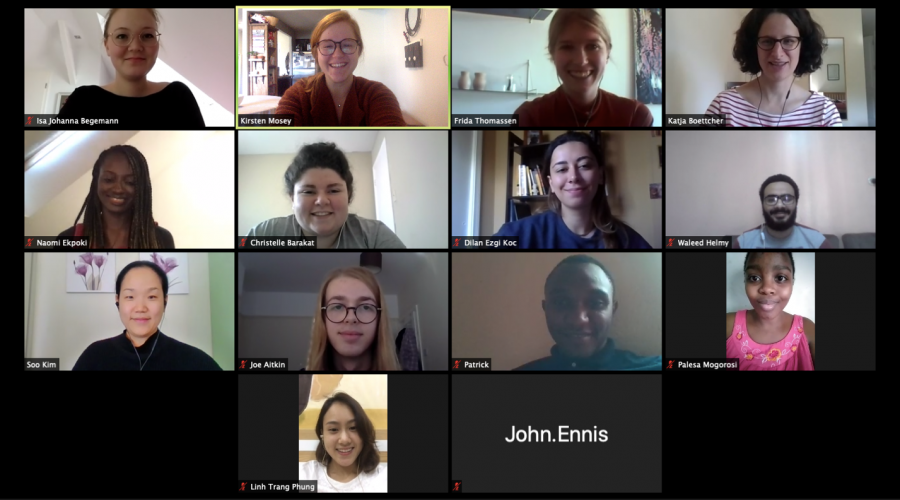 They stood for thirty minutes in silence before singing "Nkosi Sikelel' iAfrika", followed by a song for women's freedom:

you will be crushed!)

This 1956 rallying call from the Women’s March in South Africa reminds us of women’s political power. But in the debate for disarmament, where are all the women?

On 6 October 2020, the Youth Champions for Disarmament sat down virtually with UNODA’s gender and disarmament experts to learn more about the role that gender plays in disarmament and armed violence. This webinar strayed from the topics that the Youth Champions had previously focused on, bridging the gap that divides gender issues from practical action and research for disarmament.

The Youth Champions first heard from Frida Thomassen, a Swedish Junior Professional Officer with UNODA. Basing her talk around three pillars– gender-responsive disarmament and gender mainstreaming, full and effective participation of women and men in disarmament discussions and decision-making, and gender parity and inclusion in UNODA – Frida shared some historic milestones in the UN’s pursuit of gender equality as a universal right.

It is common today for disarmament and global development programmes to incorporate gender rights and perspectives in the ethos of their missions, as seen in the Secretary-General’s Disarmament Agenda and the 2030 Agenda for Sustainable Development. Yet, as Frida explained, this was not always the case. Landmark documents like the 1995 Beijing Platform for Action, Security Council resolution 1325 (2000), and General Assembly resolution 65/69 all advanced ideas and foundations that we now largely take for granted. As more countries, UN agencies, and citizens learn how gender affects policies, principles, and outcomes, we move closer to understanding how to move forward in every area of disarmament, with both men and women at the table.

Drawing on Frida’s detailed explanation of how UNODA and the UN as a whole are engaging in “gender mainstreaming”—or integrating gender considerations into their programmes and policies—Political Affairs Officer Katja Boettcher discussed the idea of “gender-responsive arms control”. A member of UNODA’s Conventional Arms Branch, Katja shared specific examples of ways that small arms affect women differently than men, and she detailed the need for disaggregated data and context-specific policy when crafting national action plans to control small arms and light weapons. When such plans treat men and women identically, they fail to address the ways that women are disproportionately harmed.

According to Katja, the way forward is to develop legally binding global policy frameworks with progressive gender-related language based on appropriate and widely collected data. Applying a gender lens to disarmament helps not only to limit gender-based violence, but also to put humans at the centre of security. 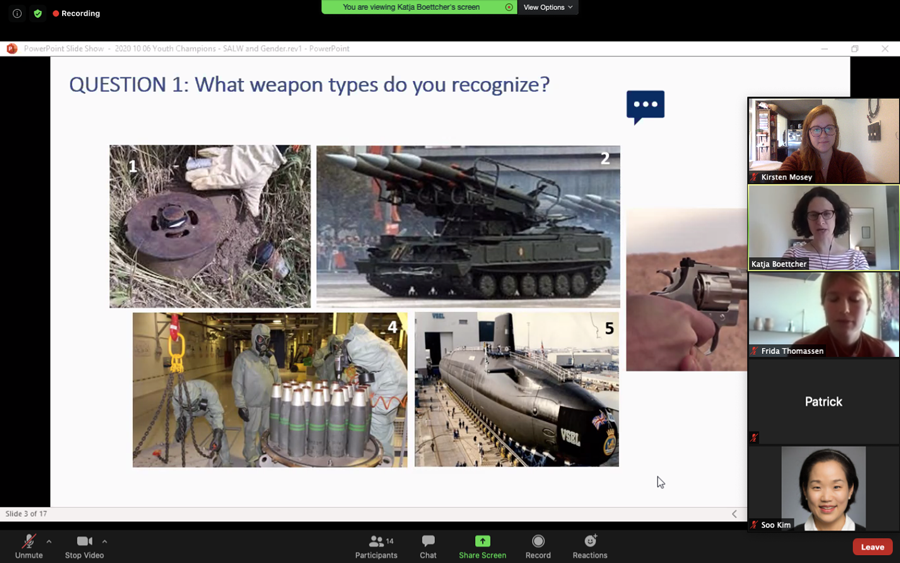 Since the Youth Champions have spent the last few months taking courses, listening to webinars and interviews, and reading many documents on disarmament, we especially appreciated the reminder to keep approaching disarmament as a human-centred field. As both Katja and Frida described, gender mainstreaming and applying a gender lens to disarmament mainly mean focusing on the actual people affected by the issues, and the ways in which their individual circumstances can alter the outcome of a situation. Adopting that mindset will not only advance women’s causes, but also make way for inclusive policies for non-binary people, the LGBTQ+ community, the disabled community, and other marginalized groups long left out of policy discussions and frameworks. Put simply, gender equality is a human right, and seeking gender equality in everything we do will make a difference in the lives of those affected by armed violence.

The gender and disarmament webinar encouraged us, the Youth Champions, in our role of advocating for disarmament within our generation. Drawing upon the four pillars of Security Council resolution 1325 (2000), we learned about the importance of participation, protection, prevention, and relief and recovery. The Youth Champions programme represents the participation pillar; notably, 7 out of 10 of us are women who all hail from different geographic regions and backgrounds. As noted by Soo Hyun Kim, Political Affairs Officer and UNODA Youth Champions for Disarmament team lead, the world needs more women from all backgrounds advancing the cause of disarmament and leading the way for future generations. We, as Youth Champions, are thankful for the example set by our organizers in UNODA and the #Youth4Disarmament team.