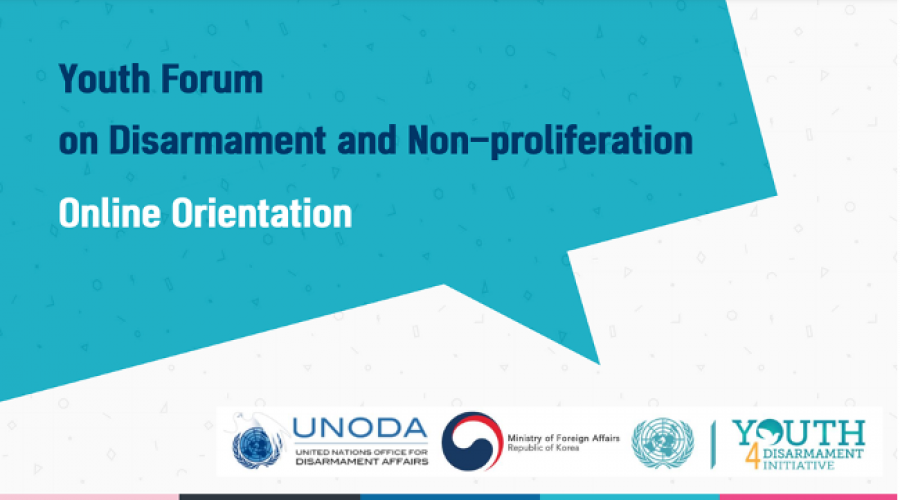 On 9 June 2021, 26 young leaders and advocates from around the world attended the virtual orientation session of the Youth Forum on Disarmament and Non-Proliferation, organised by the #Youth4Disarmament initiative of the United Nations Office for Disarmament Affairs (UNODA) and the Ministry of Foreign Affairs of the Republic of Korea.

The session provided an opportunity for participants to get to know one another, hear from experts working in UNODA, and engage in constructive and insightful discussions on how disarmament and non-proliferation connects with (i) the UN Sustainable Development Goals (SDGs), (ii) new and emerging technologies, and (iii) gender.

In their opening remarks, representatives from UNODA’s #Youth4Disarmament Initiative and the Government of the Republic of Korea highlighted the role of young people in providing innovative approaches to advance our disarmament objectives. In the substantive presentations that followed, UNODA staff provided insight on the linkages among the sub-themes with disarmament and non-proliferation and also shared information on the United Nations’ work in these areas.

In three working groups, young leaders explored the role of youth from the approach of the “3 Ps”: “Participation, Perspectives, and Partnership”. UNODA Staff Members, acting as facilitators to spark and help guide the discussions, were:

In Working Group One, young leaders discussed the role of youth in placing disarmament and non-proliferation upfront in their own societies to help advance the SDGs. They shared ideas on approaches to address the problem of a world that is over-armed and peace that is under-funded.

Working Group Two discussed the opportunities and challenges posed by new and emerging technologies, how they relate to youth and how they may shape the future as well as global norms. This included promoting responsible innovation and use with a focus on biotechnology, cyber security, space security and Artificial Intelligence (AI) driven technologies, such as autonomous weapon systems.

During discussions amongst Working Group Three, young leaders applied gender perspectives to disarmament and non-proliferation issues and shared ideas on how to reduce gender inequalities within decision-making, opportunities and education in this field, as well as approaches to deconstruct gender stereotypes persisting in societies.

Before closing, rapporteurs from each working group presented summaries of the deliberations to the plenary.

In preparation for the Youth Forum on Disarmament and Non-Proliferation taking place on 29-30 June 2021, the young leaders will develop 2-3 recommendations during the intersessional period within their Working Groups. These elements will be presented to the plenary followed by interactive discussions on how young people can contribute to advancing the disarmament agenda for a safer, more sustainable and peaceful future for us all.

The agreed recommendations will then be discussed and subsequently adopted as the “Seoul Youth Declaration for Disarmament”, which is intended to be shared at the First Committee of the UN General Assembly in connection with the biennial resolution on Youth, Disarmament, and Non-proliferation sponsored by the Republic of Korea.

For more information on the Youth Forum on Disarmament and Non-Proliferation, check out the previous news story available on the #Youth4Disarmament website.